With a capacity for 4,000 spectators, this colossal monument is one of the most important remnants of Roman civilisation in Spain.

It was built in the 1st century AD, during the reign of Emperor Tiberius. The slope of the mountain offered the perfect terrain for the arrangement of the seats, with this part of the structure being referred to as the cavea. The upper tier stands at 105 metres above sea level, while the lowest tier stands 75 metres above sea level. The stage, and the wall behind it, would round off the venue, generating incredible acoustics. There were two main entrances (“Aditus Maximi”): one at the end of Carrer Antigons and another at the end of Carrer del Cardo, which is now the Carrer Vell del Castell.

There are two distinct parts. First, the cavea, or stands, consisting of three sets of terraced seats arranged in a semi-circle. Second, the stage, which stands at the height of the upper portico of the stands. The consolidation of the monument began in the mid 20th century, ending with the execution of the restoration and rehabilitation project drawn up by architects Giorgio Grassi and Manuel Portaceli and carried out by the Valencian Regional Government. The project sought to comprehensively restore the structure, giving the image of unity between the stands and stage while enabling the performance of large-scale theatrical productions. It is the main headquarters of the “Sagunt a Escena” festival. 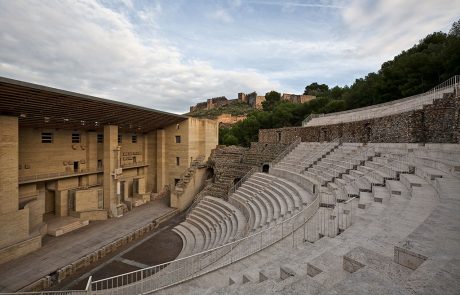 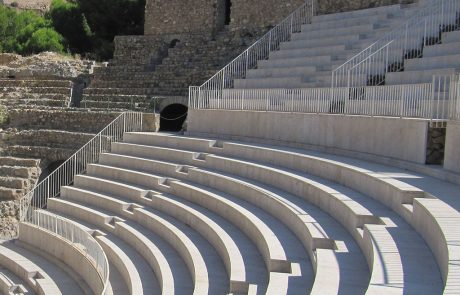